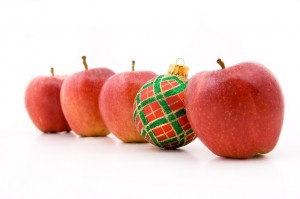 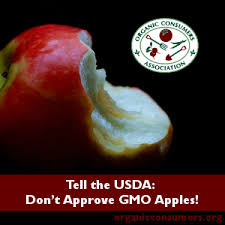 You can also find information and a comment page on the government website for the USDA/APHIS comments for the Arctic Apple® below.  Please note the government is shut down today due to inclement weather.  Also note that links for the documentation (pdfs) on this site were accessible originally but seem to be having technical issues at the time of this blog post.  I provided both a link and the full URL for your convenience.

Neal Carter from Okanagan Specialty Fruits located in Summerland, British Columbia in Canada has introduced the Arctic Apple®, the first GM apple for deregulated status with the USDA.  The first varieties introduced are the Golden Delicious (GD743) and the Granny Smith (GS784) apples.  The apples, known as GD743 and GS784 are purported not to brown for 15-18 days.

Who or why would the market want a non-browning apple?  In a NY Times article, it was revealed that the commercial market had concerns that the technology wouldn’t benefit them in the market place.

As for the commercial market, John Graden, president of Crunch Pak, a leading supplier of sliced apples, said the Arctic technology might not keep the apples from turning brown for the required 16 to 21 days.

“We don’t think they’d hold long enough,” he said. Mr. Carter of Okanagan said the nonbrowning effect could last enough if the right additional steps were taken to control bacteria and fungi.

Interesting research information about the process used for this GM apple which is referred to as PPO (Polyphenol oxidase) suppression.  Research shows that there are concerns for this technology, using PPO in plants.

Did I mention the biotech companies have attempted a similar non-browning GMO trait unsuccessfully in the past?  Three times in tomatoes and once in cantaloupe and none of these are on the market.

Food manufacturers and restaurants have indicated that they don’t want this GM apple.

Gerbers (Nestle) and McDonald’s indicated they aren’t interested in using the GM Arctic Apple in their products.  The companies responded to a letter initially sent by Friends of the Earth in regards to the development of the GM apple known as the Arctic Apple®.

The farmers don’t want it.

Her letter shares the association concerns.  The rejection of the GM apples as exports to other countries who ban or label GMOs is of concern when $1 out of every $3 dollars in the apple business is revenue derived from exports.  Why would they want to lose one-third of their business to countries that have banned GM foods?

How do you know if it’s safe to eat?  The current methods are good enough for me.  A little lemon juice always work great for grandma and for me.  When do you know if the apple’s rotten if it doesn’t brown?  Even in the paperwork submitted for the deregulation they admitted the following:

One of the most common methods is the application of a reducing agent such as ascorbic acid (vitamin C) in combination with calcium chloride (firming agent) (Chiabrando and Giacalone, 2012).

The biotech/chemical companies want the Arctic Apple, but why?

According to the documentation from Okanagan Specialty Fruits to the USDA for the deregulation status it was determined:

GD 743 and GS784 were also observed to be no more resistant to pest and diseases of apple compared to GD and GS under highly managed orchard conditions (with the possible exception of the relatively minor pest, Tentiform Leaf Miner, for GD784).

also noted in the same report…

A significant difference in the incidence of Tentiform Leaf Miner (TLM) between GS784 and GS was observed in 2005 at the Washington field trial with a higher incidence of TLM being observed on GS784.

HOW DID THE COMPANY ENGINEER THE APPLE?

The company silenced a gene in the apple (that controls browning) by inserting modified apple DNA along with genetic sequences from three different species:

2 A terminator sequence from a bacterium (Agrobacterium tumefaciens taken from its Nopaline synthase gene: nos); and

3 An antibiotic resistance marker gene from a bacterium (Streptomyces kanamyceticus) here the nptII gene (which confers resistance to the antibiotic kanamycin).

The technology was developed in Australia and licensed by Okanagan Specialty Fruits.

Or better yet….do something about it – let yourself be heard!

Please take a moment and sign the Organic Consumers Association petition to let your voice be heard.

For more information you can find Fact Sheets on the Arctic Apple® on the following websites:

One Response to Bah humbug! No Arctic Apples for Christmas