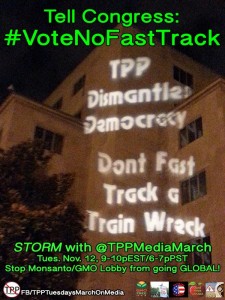 There’s a trade deal under consideration—the Trans-Pacific Partnership (also known as the TPP)—that would allow corporations to overrule U.S. laws.

We need to stop this bad deal before it becomes the law of the land!

This trade deal would give polluters unrestricted access to our land, air, and water, if they see a profit opportunity. Environmental toxins pose the greatest risk to children. We need to be able to challenge polluters that want to enter and pollute our communities!

This bad deal would give polluters rights to our land, air, and water.

No right to label GMOs

Citizens across the U.S. have been working hard to make labeling of genetically engineered foods the law. We’ve seen allergies and other health problems in our own children and know we need full disclosure about what’s in the food we buy.

This bad deal would likely make the labeling of genetically engineered foods illegal because it could interfere with the profits of giant chemical companies.

The text of this deal is secret, making it the first-ever trade deal with classified language. Members of Congress are only allowed to see the language one section at a time, and only if they promise not to tell anyone about it!

This bad deal has been worked out in secret by the president and hundreds of the world’s most powerful corporations.

We need an open debate

The President wants to “Fast Track” this deal—get Congress to limit debate and to “take or leave” the whole deal with an up or down vote.

Fast Track Authority would mean this bad deal could become the law with almost no debate!

The vote could come up at any time, we need to STOP TPP FAST TRACK.
Congress listens to us when we stand together.

Top 10 Reasons to Call Our State Reps to Urge a ‘Vote No to TPP Fast Track’:

Join our GLOBAL Day of Action to raise #TPP awareness on Nov. 12 by uploading #VoteNoTPPFastTrack photos to social media EVERYWHERE, then STORM together at 9pmEDT/6pmEST.

So, the most important message right now is to contact Congress (focus on Reps more than Senators) and urge to Vote No to TPP Fast Track.  Use this interactive state map to find out how your legislators plan to vote:  www.PDAmerica.org/tpp; when you click on this link, you have to scroll down to see the map, it’s already set on Alabama (alphabetical order/first state); so just scroll down to your state & click.

Call Congress (emphasis on the House, not Senate) to Oppose TPP Fast Track

This entry was posted in Call to Action and tagged Congress, Fast Track, Storm, TPP, Twitter. Bookmark the permalink.

One Response to Call Congress to Stop the TPP NOW!